The ethnic minority parents didn’t have the chance to go to school, they would like it to be different for their children, but they can’t afford to pay the fees. Children who do not go to school have no other choice but to work in the fields, in the paddy fields or as cattle-herds.

EDUCATE A CHILD FOR A BETTER LIFE !

What does your sponsorship pay for ?

From the first year of primary school there are school fees, so from then until the end of secondary school we pay : 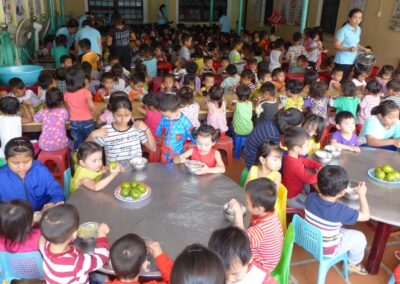 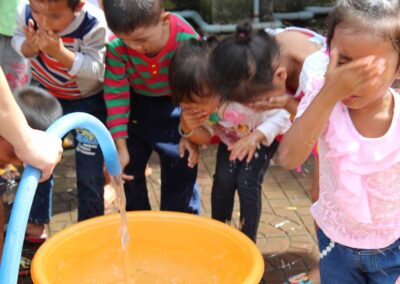 Freshening up after lunch at the canteen

Situated in the grounds of the nuns’ premises, there is a dormitory for girls which has been part of our project since 2008. In the beginning there were 80 boarders of secondary school age, but just one dormitory with 40 beds. In the evening the 40 other girls went to one of the local orphanages where they slept. Later on another dormitory was created so that all 80 girls could sleep on site. At this time their refectory was in a former hen-house no longer used for hens following the avian flu epidemic. The corrugated iron hen-house refectory was pulled down and replaced by a mortar and brick refectory which we financed.

Over a period of several years, we also financed a self-study room, a library and tiled bathrooms.

We wanted to have water heaters installed in the bathrooms and we wanted to buy a couple of washing machines ; but the Sisters refused because they didn’t want the girls getting used to “luxuries” they have little chance of having at home.

In 2012 the boarding capacity was increased to 120 with the financial help of the Diocese. This made it possible for the Sisters to take in boarders of primary school age.

At the end of 2018 the nuns decided they could no longer take in 120 boarding girls in their new premises because of the reduced dormitory size. They took in only 77 girls of primary and secondary school age, with our association paying 2 meals per day for the 77 girls, 28 days per month. The situation has changed since then as you will see below.

The atmosphere of the boarding house is both peaceful and cheerful. There is a very strong sense of solidarity with the older girls taking care of the younger ones. The girls have access to musical instruments so that they can learn to play the flute or the electronic keyboard.

The boarders come from several tens of kilometres away. The ones who live closest go home one weekend per month, the others just go home for the school holidays and even then not always …

We were in Kontum just before the 2017 Tết holiday. Harvests had been poor in 2016 and the families had insufficient food stocks, to the extent that a third of the boarders asked to stay with the Sisters during the holidays so as not to be a burden on their families. In 2019, the situation was identical.

Early 2020, faced with a growing demand, the nuns agreed to welcome some additional boarding girls. As of then, there were 105 girls in the 130 m2 dormitory. The bunk beds were pushed together so that 2 beds could accommodate 3 girls. This promiscuity can upset our sensibilities, but that doesn’t cross the girls’ minds as they are used to this closeness in their modest family homes. At the start of the 2020-2021 school year 120 girls were again accepted. We now have to supply some 6 720 meals per month to feed the 120 girls. The extra 5 € from the 30 € sponsorship will now be assigned to this budgetary item. 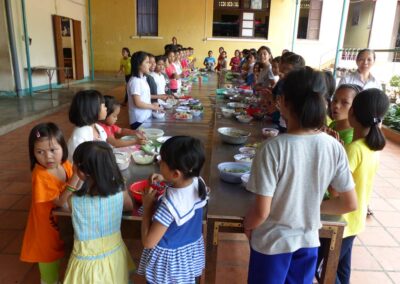 Midday meal for the boarders 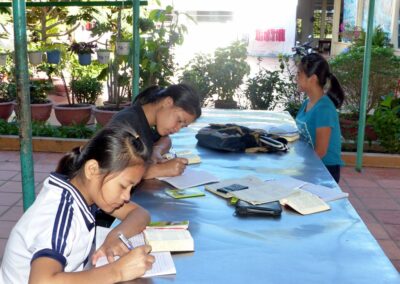 Homework in the yard in front of the dormitories 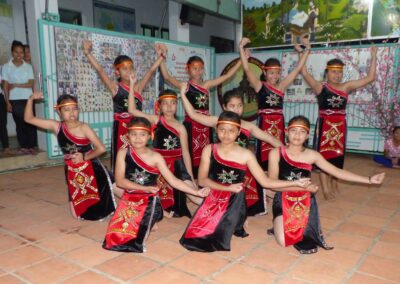 Evening dance performance in honour of the visitors 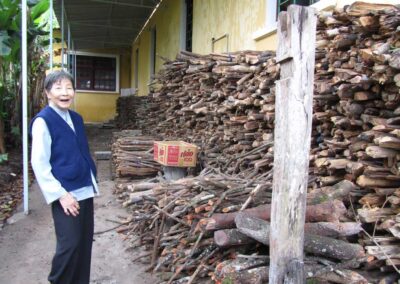 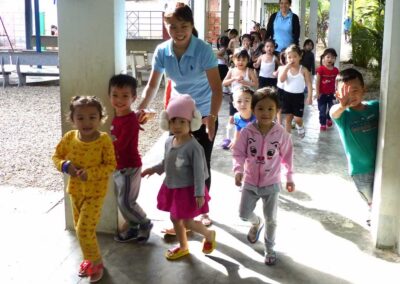 On the way back from playtime 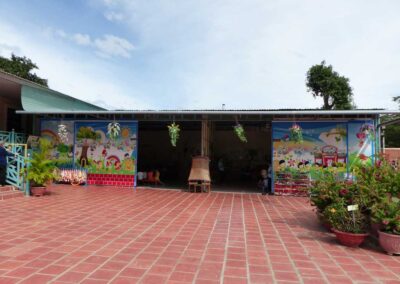 The two classrooms for the children from ethnic minorities

Below Sister Anna explaining the essential role of this school for the children from ethnic minorities.

The Vietnamese children and the children from the ethnic minority are not segregated in the playground or in the dance groups for the different school celebrations. In this way they can get to know each other gradually before going to primary school where they are in mixed classes.

headmistress of the Sao Mai school. 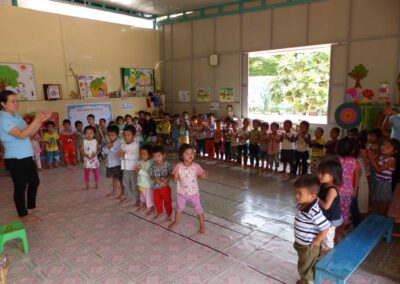 A classroom for children from ethnic minorities 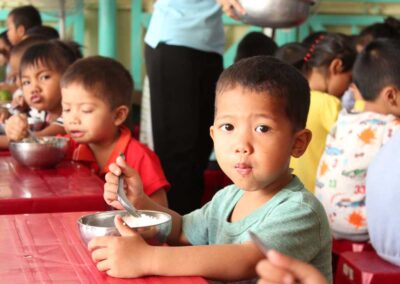 Lunch at the nursery school canteen 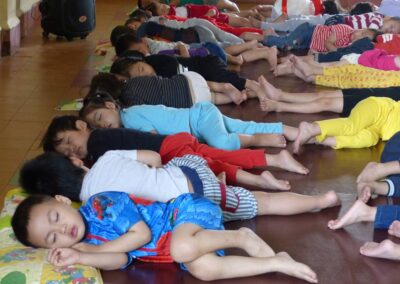 Naptime at the nursery school

In 2007 we expanded our project with the introduction of a monthly distribution of food parcels to 20 very poor families. Each parcel, worth 5 €, contains rice, salt, thin rice noodles, glutamate and dried fish. In 2018, our association distributed every month food parcels to 15 poor families chosen by the nuns. On top of that 50 sponsors paid extra to provide a monthly food parcel to the family of their sponsor child.

Early 2020, the nuns told us that, for reasons of logistics and mobility, they were unable to continue the distribution of food parcels. The extra money paid by some sponsors for a food parcel will now be used for providing meals for the boarding girls (after having obtained the sponsor’s agreement). 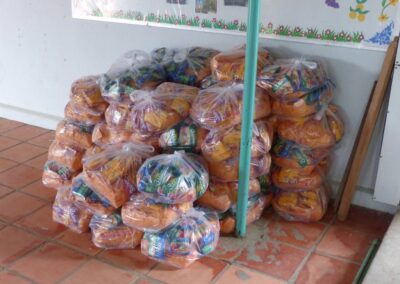 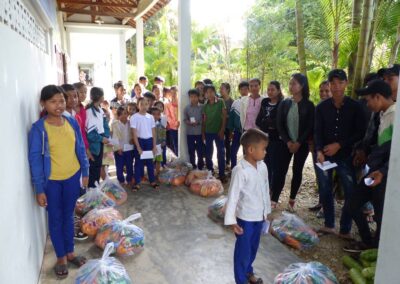 The sponsor-children receive their food parcels

and any-one else who has helped us in the past.

Are the children you help in an orphanage ? No, the children we help are very poor but live with their families. Most of them have both their parents, but some have only one parent. The confusion arises from the fact that for the first six years we worked in close partnership with another association who did work with orphanages. Can we exchange letters with our sponsor child ? Yes, we give you the Sisters’ address and they translate your letters to your sponsor child. Having said that, you should not expect very interesting letters in return. These children are extremely poor and when they are not at school they work in the fields. They have no extra-curricular activities or hobbies so they don’t have a lot to write about. They will maybe send you a drawing and thank you and tell you how hard they are working at school.